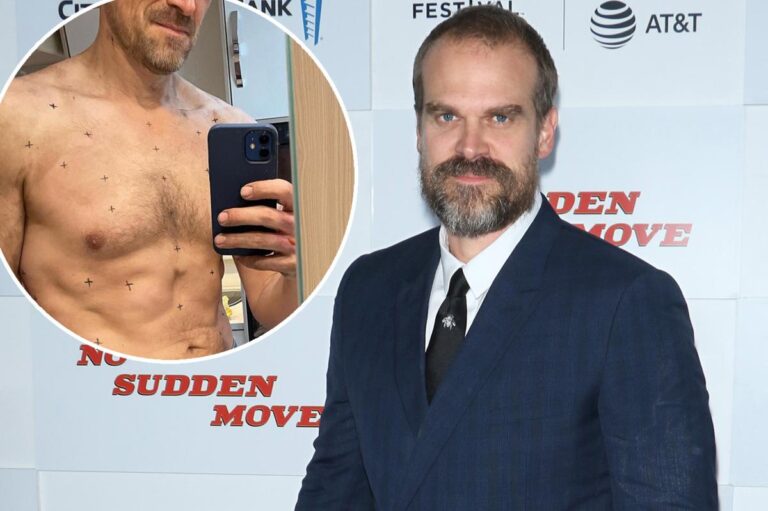 Sheriff-turned-zaddy Jim Hopper is opening up about the 75-pound weight loss that caused “Stranger Things” fans to drool throughout Season 4.

David Harbour, who plays the fictional Hawkins, Ind., police officer, addressed his stunning transformation from lovable chubster to certified hunk in an Instagram post Thursday, revealing that he has “recently ballooned up again” for a new role.

“Many of you have asked about Hopper’s physical transformation from season 3 to season 4. My trainer @davidhigginslondon worked with me for 8months to make the transformation, and then another year to keep it through the pandemic,” he shared alongside photos of his body from Season 1 and the most recent season.

“All told it was a difficult and exciting ride, changing diet and exercise plans (or lack thereof).”

Harbour, 47, said he lost more than 75 pounds and dropped to 190 by the time it came to film Season 4. The “Hellboy” star also shared that he had to gain weight back to play Santa Claus in a film out this holiday season.

“I am struggling to fight back down towards a good weight for wherever hopper ends up in season 5,” he said, acknowledging that “all this up and down is not good for the body, and I’ll have to give it up soon.”

Despite the health risks, Harbour said having his weight be a roller-coaster ride “is such a fun part of the job” because it allows him “to live in a different version of your skin for a while.”

The “Black Widow” actor previously told Page Six that “not eating” was the secret to his weight loss.

“It’s amazing. You try to do all these different things, the protein and the this and that, and then you just stop eating and you lost weight.”

Harbour joked that “putting on weight is my favorite thing,” adding, “I’m really good at it.”