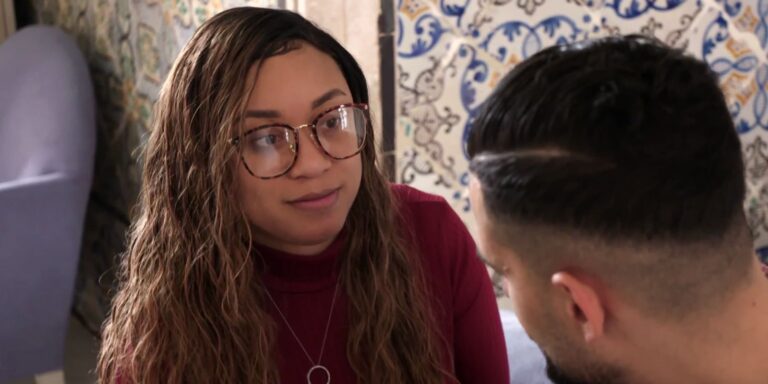 90 Day Fiancé fans are shocked by Memphis Smith’s many new looks. The reality star lost almost 50 pounds after she gave birth to her third baby.

34-year-old nurse practitioner Memphis Smith had been surprising 90 Day Fiancé viewers with one makeover after another since they last saw her on 90 Day Fiancé: Before the 90 Days. When Memphis went to Tunisia to get married to Hamza Moknii, fans laughed at her for her bad decision. Memphis was a mother to two kids from a couple of different relationships, and had been talking to Hamza for seven months on a dating site prior to making the big decision. Memphis planned on bringing the unemployed Hamza to America. She loved how Hamza always put her first, unlike other men she’d been with in her past.

Memphis was warned about Hamza using her for a Green Card, but all that mattered to her was how happy he made her. Memphis paid for Hamza’s visa out of her pocket, which her mom thought was a big red flag. Memphis took that risk, only to end up separated from Hamza a year after their wedding. Fans mocked Memphis for trusting Hamza blindly. What made the situation trickier was Memphis and Hamza not using protection, and finding out that they were pregnant immediately after their wedding. Memphis and Hamza are seemingly going through a divorce, and she’s now a single mother.

With Hamza no longer in the picture, Memphis is practicing self-love and self-care. As per leaked text messages between Hamza and Memphis, he wanted a big city life that she couldn’t give him. Hamza has been sharing videos from Chicago on Instagram, which suggests that he’s no longer living with Memphis. Fans are hoping for Hamza and Memphis to be the seventh couple on 90 Day Fiancé: Happily Ever After? (the cast is yet to be announced), just so they can find out what Memphis has been trying to tell them via her own cryptic Instagram stories.

However, there’s something else that Memphis uses Instagram for, and it’s to show off her back-to-back makeovers to her fans. Memphis showed off her post-baby body in a stunning leopard print dress in April. She wore her thick, long hair in curls, and let them cascade over her shoulders when she posed for a mirror selfie with a smoldering gaze. “That dress looks incredible on you!” a 90 Day Fiancé fan told Memphis, while they continued to praise her by calling her a “goddess.” Another follower asked Memphis, “How do you look so good after having a baby,” but she wants to keep it a secret.

Memphis has revealed that she weighed 160 pounds when she delivered her third baby. Memphis started to lose weight, with the number on the scale dropping to 120 pounds, and she’s currently at 113 pounds. She says her fitness journey is a commitment to getting healthier. However, it’s also given Memphis the strength to be confident. In early July, Memphis showed off her slimmer face to fans in her “natural beauty” selfie update. The Michigan mom Memphis wore no lashes and no wig, but let her glowing skin do the talking, as she got called “gorgeous” and “beautiful” by her fans. Just two days later, Memphis posted a look that shocked everyone. She looked like a different person with her short bob and blonde hair color.

Memphis loves changing her hair color and style. She enjoys being versatile and playing with different looks, such as Memphis’s current hairstyle with butterfly locks. Memphis used to don wigs on 90 Day Fiancé, but embracing her natural look also comes easy to the TLC celeb. Memphis has lost a great deal of weight since her third pregnancy, and after deciding to part ways with Hamza. Some of Memphis’ fans may want her to get back with Hamza, but others do believe that the reality TV star Memphis has never looked as happy as she does now, while she insists she’s feeling “blessed.”

Next: 90 Day Fiancé: Why Memphis Will Be Financially Responsible For Hamza