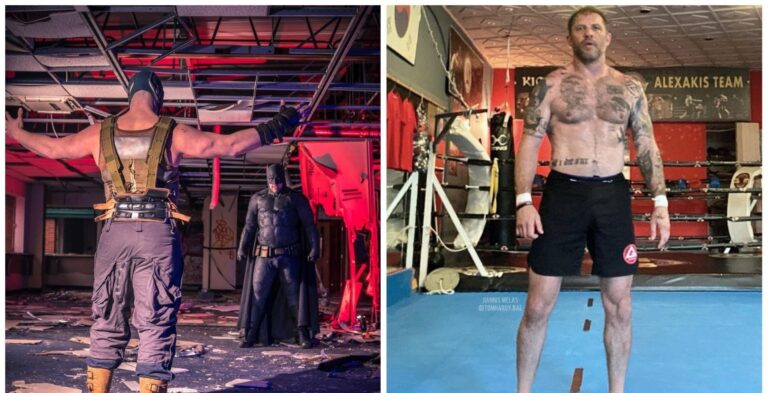 Tom Hardy is an English actor who is well known for his roles in Warrior and The Dark Knight Rises.

The two characters he performed had vastly different diets and fitness regimens, but in this article we’ll talk about his more recognisable role as Bane.

Tom Hardy’s character in Dark Knight Rises is meant to be a big man, for which Hardy gained 30 pounds. So his diet had to be structured in a way he could bulk up.

Hardy used to have six full meals a day, full of carbs and protein to gain mass. He also included a bunch of supplements – both protein as well as vitamin, to accelerate recovery and amplify gains.

Tom Hardy took whey protein (generally considered the highest quality of protein supplement available) to accelerate muscle growth. He also had creatine and glutamine for the same purpose. He also regularly had protein bars to up his protein as well as nutritive intake.

Hardy included multivitamin supplements in his diet to compensate for nutritional deficiencies and provide adequate intake of vitamins and minerals such as calcium, magnesium, fibre and potassium.

Tom Hardy ate six whole meals a day, including calorie-heavy foods like eggs, oats, steak, rice and chicken along with other foods in enough quantities to meet his daily calorie limit.

For his first meal, he would eat two whole eggs, four egg whites, four slices of brown toast and mixed fruit and nuts, which supplied his body an array of proteins, carbs and healthy fats.

For his second meal, Hardy ate 200 grams (7 oz) of lean steak and 100 grams of brown rice paired with grilled asparagus.

Meal 3 would usually be a shake made out of two scoops of whey protein, one tablespoon of peanut butter, skim or almond milk and one banana.

For his fourth meal of the day, Hardy would eat 225 grams (8 oz) of chicken breast, 200 grams of brown rice and grilled vegetables.

For his fifth meal, he consumed a tuna sandwich or wrap with 90g-100g of tuna, tomato & lettuce in 2 slices of brown bread or 1 wholemeal pita wrap.

The final meal of the day would consist of 100-150 grams of oatmeal, one scoop of whey protein and a handful of blueberries.

The character of Bane was designed to be one of the most physically dominating villains of all time. So Tom Hardy had to work out four times a week to build 30 pounds of brute muscle.

The hypertrophy-focused training programme maximised the growth of chest, arm, back and leg muscles for Hardy. The A-lister increased his weight from 76 kg (165Ibs) to 90 kg (198 Ibs) (200Ibs).

This type of rigorous exercise regimen usually requires an active rest day. That was essential to provide Hardy with adequate rest and recuperation time.

On Mondays, he trained his chest and legs with exercises like Floor Crunch, Incline Barbell Bench Press, Partial Deadlift and more. He usually performed two sets of five to eight sets.

On Tuesdays, Hardy would work out his arms and legs with exercises like Seated Barbell Curl, Hanging Leg Raise, Modified Hamstring Raise, Walking Lunges and more. He usually performed two sets of five to eight sets.

Wednesday used to a recovery day for Hardy, where he would usually perform static stretches and mobility exercises.

Thursday was abs and back workout day for Tom Hardy, with exercises like Wide Grip Upright Row, T Bar, Barbell Row, Side to Side Pull Up and others.

On Friday, he would once again work out his arms and legs with Lying Leg Raises, Romanian Deadlift, Single-Leg Press, Weighted Front Squat and more.

Tom Hardy followed an insane diet and workout plan for his role as Bane in the movie ‘Dark Knight Rises’. He gained 30 pounds of weight in sheer muscle and strength for the movie.

You have to understand that celeb workouts and diets for a particular role can get challenging, even bordering on the extreme. Hardy’s workout and diet regimen is not strictly sustainable over the long term. Of course you may take inspiration from his routine, but keep in mind that he did that for a role.