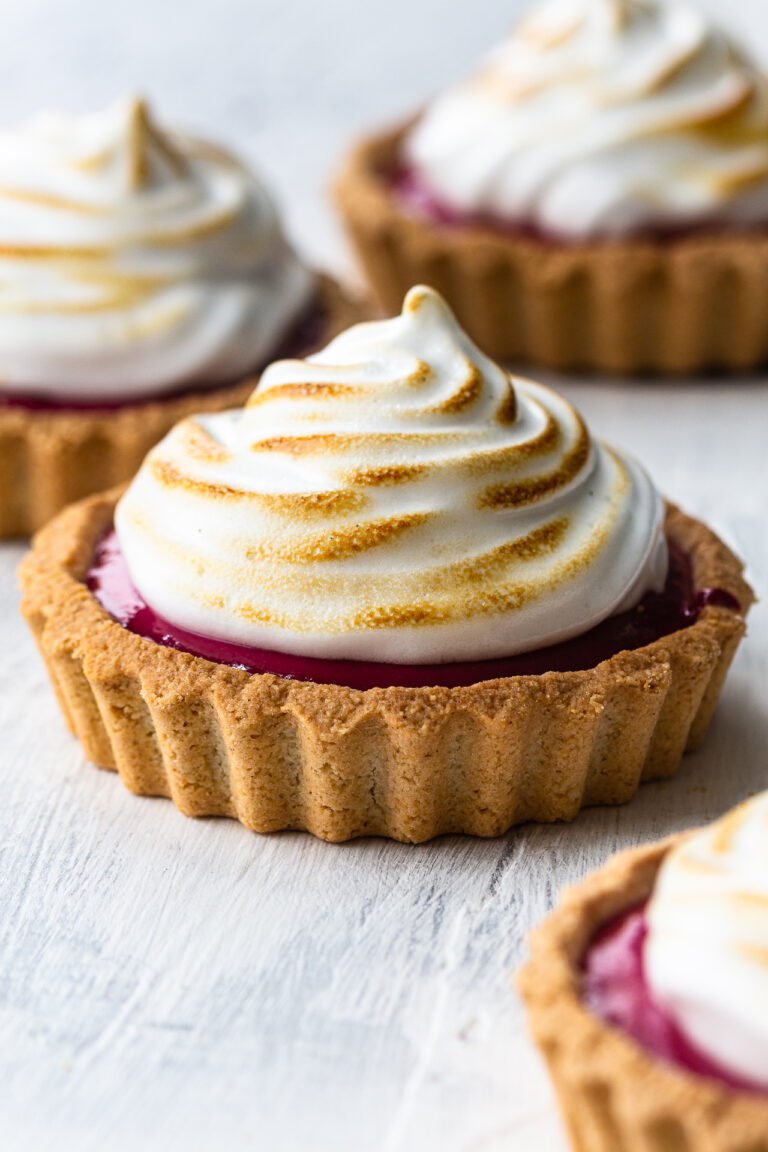 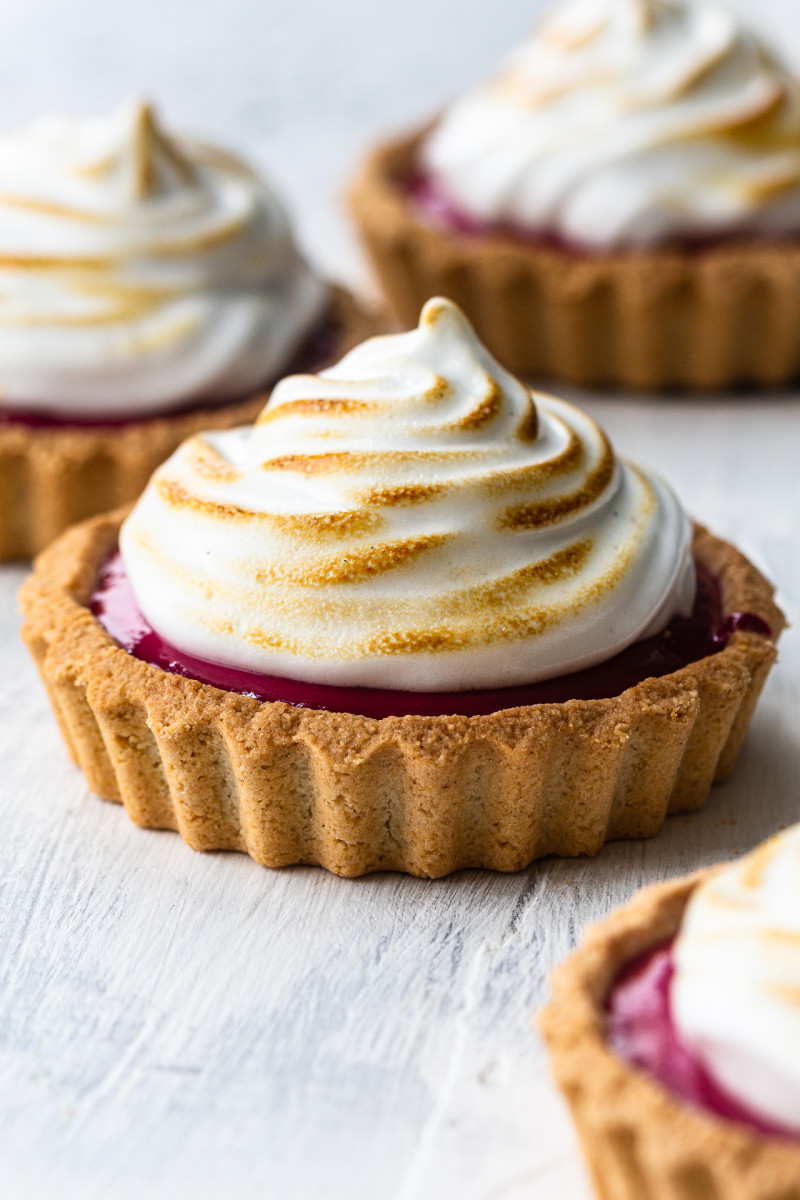 Happy weekend everyone! Apologies for a few days of radio silence and some delay replying to your comments and questions. Duncan and I went down to the Dorset coast for a few days to relax and recharge our batteries.

It was beautiful and we even managed to have two beach days as the temperatures started climbing towards the end of this week. We were a little gutted to leave as the weekend and the entire of next week is meant to be even sunnier, but that’s life.

Today’s recipe is something I concocted before we left and I hope you’ll enjoy it. As I adore raspberries, I made raspberry curd tarts in crispy gluten-free tart shells and topped with an optional layer of meringue. They are not hard to make and delicious to enjoy in the summer shade. I hope you’ll agree.

MORE ABOUT THE INGREDIENTS

GROUND ALMONDS – I used dried out leftover pulp from making almond milk for vegan ricotta recipe as I tend to make it on a weekly basis so I always have some ground almonds to use up. If you are not in a similar predicament, use shop bought ground almonds, they work the same.

OAT FLOUR – I used shop-bought oat flour but you could make your own oat flour by pulverising oats in a high powdered blender.

CORNFLOUR / CORNSTARCH – I used a little bit of cornflour (or cornstarch for the US readers) to bind the crust together and some more to thicken the curd. Theoretically tapioca starch and arrowroot powder work in a similar manner, but I have not tried either of them here.

COCONUT OIL or VEGAN BUTTER – I used odourless coconut oil to make the crust and to thicken the curd. You could use melted vegan butter (one that comes in a block, like Naturli in the UK) instead.

RASPBERRIES – For the curd, I used frozen raspberries because they are cheaper and more accessible to some. I thawed them over a low heat stirring frequently, then I pressed them through a sieve to separate the pips from the juice as I wanted the curd to be smooth.
I got just under a cup of thick raspberry juice.

AQUAFABA – that’s right, here I go again with my favourite bean juice (I love working with it as may you know by now). I used aquafaba from homecooked chickpeas as I always cook chickpeas but you can also just open a tin or a jar of chickpeas and use the brine. Make sure all your utensils, bowl and hands are spotlessly clean as aquafaba and grease hate each other like cats and dogs (that actually is not true as exemplified by numerous ‘my cat and my dog are BBFs’ videos but you know what I mean 😉 ). To banish grease, use a glass or metal bowl and wash your whisk attachments in soapy hot water carefully.

XANTHAM GUM – those of you who bake gluten-free will be already familiar with this ingredient as it’s one of the binders used in gluten-free pastry and dough. It also happens to improve the livespan of a vegan meringue so if you have it to hand, I recommend adding a little.

USE SCALES – pastry work needs precision so I strongly recommend using scales instead of measuring by volume, which is inherently imprecise and may lead to a disappointing outcome. I give US measurements as people ask for them but they are approximations only and when it comes to making desserts like this one being accurate is key. 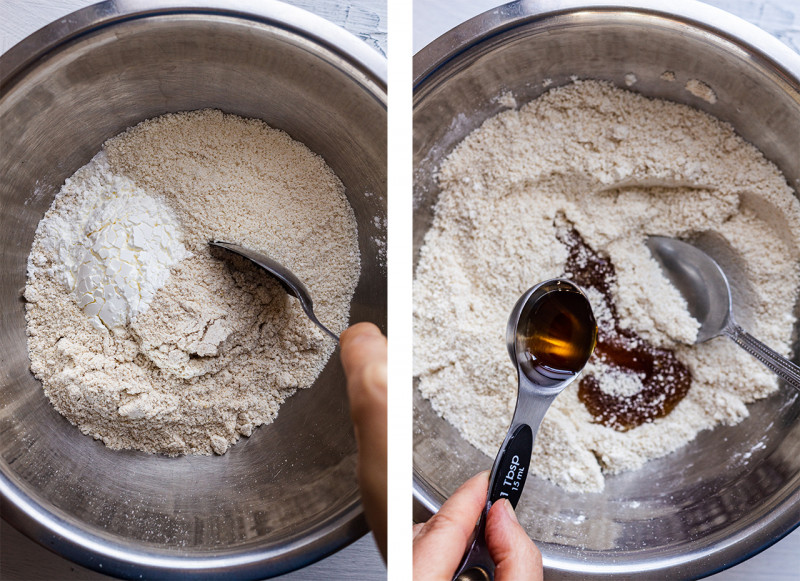 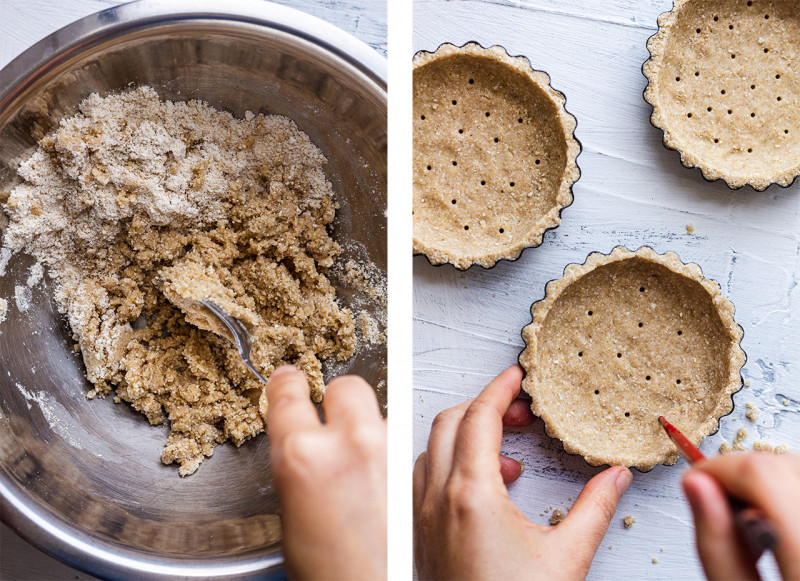 Stir everything well with a spoon first and then your hands until you obtain a uniform dough. Mould the dough to the inside of your tart cases with your fingers. Once neat and well compacted, make a few holes in the base with a chopstick or a skewer.

To make the filling, press raspberries through a sieve to get rid of pips. You should end up with just under a cup of raspberry juice. 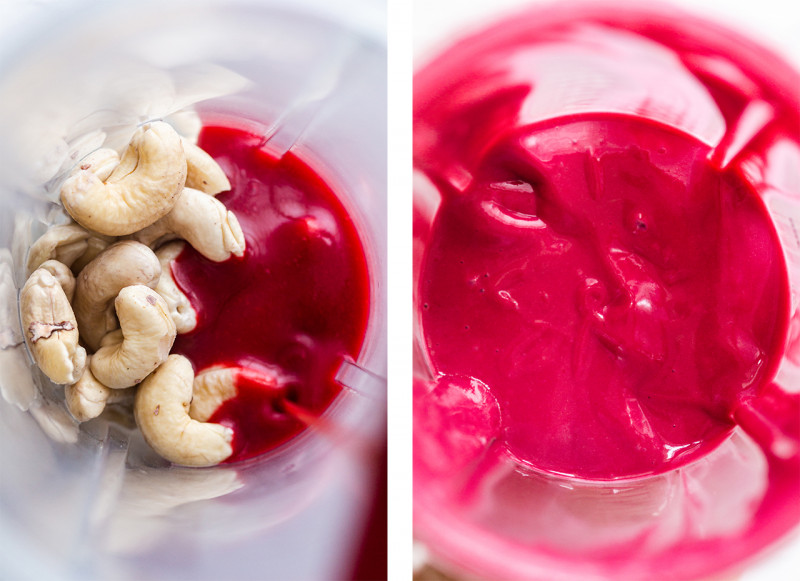 Add raspberry puree to a blender with drained cashews and blend until smooth. Next, transfer to a pot, sweeten with sugar, thicken with cornstarch and add coconut oil or vegan butter to improve consistency. 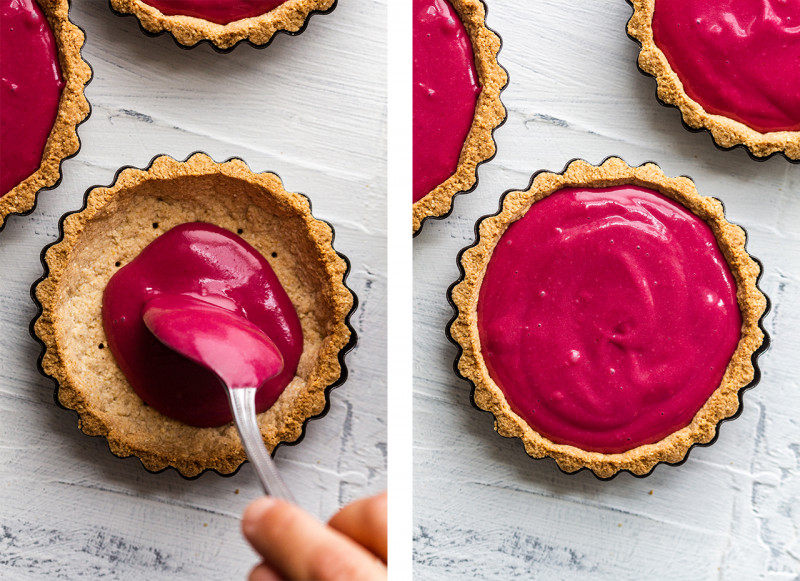 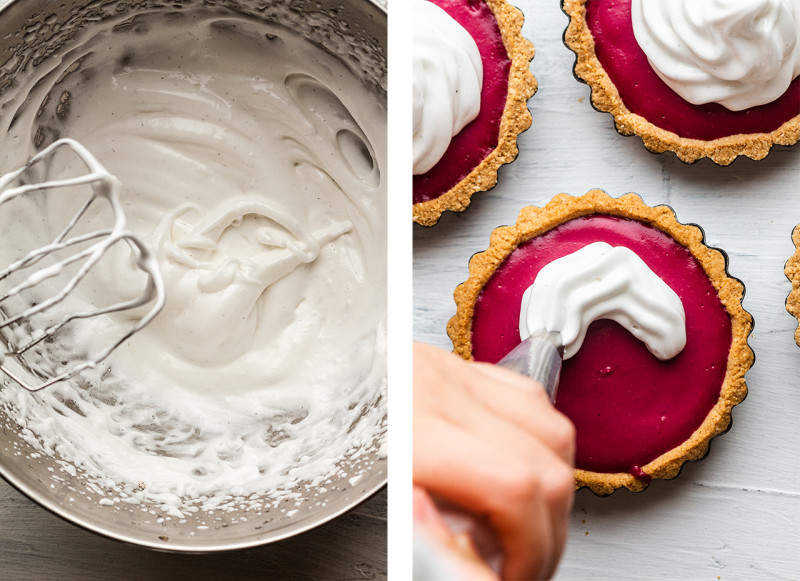 Once set you can decorate the tarts with vegan meringue (or vegan whipped cream), toasting it with a chef’s torch or under a grill after piping. 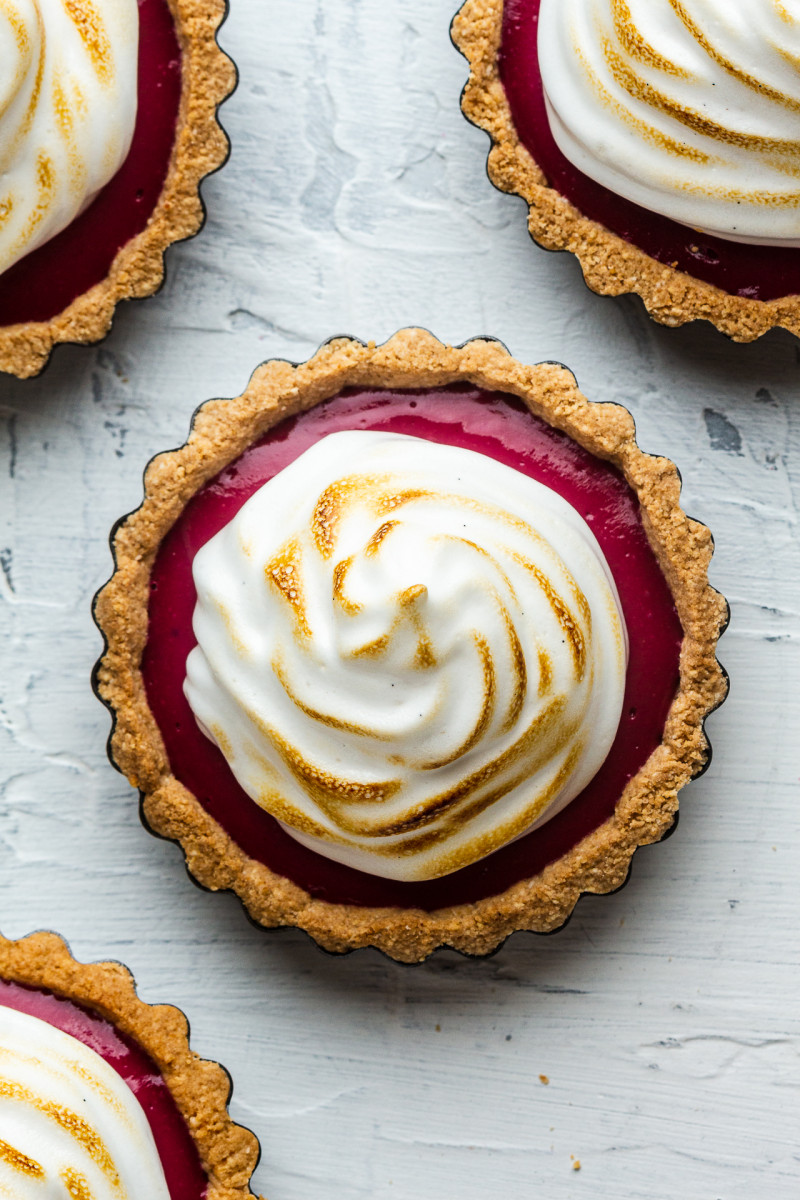 *RASPBERRIES – I used frozen raspberries as they are cheaper and more accessible to some, but fresh raspberries will work just as well.

*GROUND ALMONDS – This is a perfect recipe to use dried almond milk pulp. I like making this vegan ricotta so I always have plenty of it. I air dry it for a few days (less if the sun is shining), then grind it again in a food processer (as it likes to clump up) before storing in a jar.