VelTree vegan restaurant in Charlotte, NC is branching out 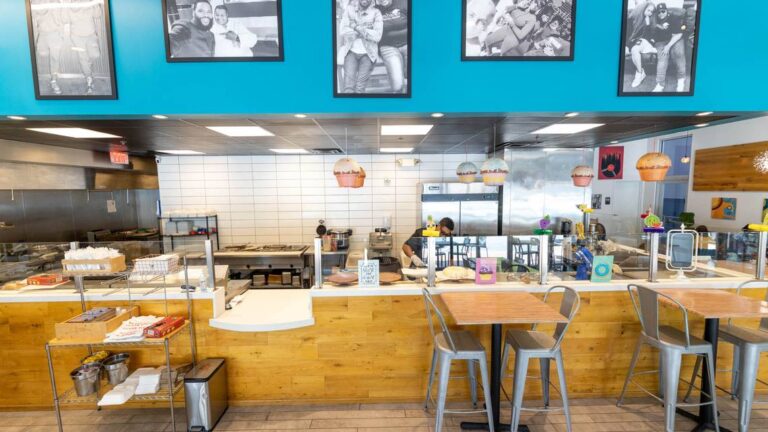 It’s not uncommon to find Charlotte chef Velvet “Vel” Kelty-Jacobs spending an entire Sunday in the kitchen, testing, sampling and reimagining recipes handed down from her grandmothers.

Vel grew up in the kitchen, shadowing her Grandma and Ma as they taught her to make comfort soul foods like country fried chicken and gravy or savory macaroni and cheese. The main ingredients, Vel says, are the “love and the energy that goes into the food.”

“Everything I create stems from the way my grandmothers cooked — their blend of spices, their recipes, the homemade sauces. I cook to honor them and keep their memory alive,” said Vel, who owns VelTree, the Vegan Experience with her wife, Treona “Tree” Kelty-Jacobs.

[RELATED: Juniper Grill is open in Ballantyne — just in time for patio season.]

VelTree, which opened in 2018 as a takeout only shop, moved in December from University City to Ballantyne Village and is now a full-service restaurant. In setting up their new location, the restaurateurs recognized the importance of serving delightful food in an eclectic, warm atmosphere.

“Food, fun and family is what you’ll find here,” Vel said. “We serve up plant-based comfort food that feels like grandma’s hug or auntie’s kiss. The atmosphere is so relaxing and laid back, and music has become such a part of the ambience.”

The couple has big plans in store — we’ll share those in a bit — but before discussing the future of the business with CharlotteFive, Vel and Tree took a walk down memory lane to share their journey to where they are now.

The women met in Maryland at a vegan restaurant that Vel once co-owned with her sister. Tree came in looking for soul food, absolutely loved what she had, and the women struck up a friendship. Soon they launched a business partnership, creating a nonprofit to help underserved communities understand the value of plant-based food.

Tree and Vel made the ultimate commitment to each other on May 17, 2015 — their wedding date.

“As Black, LGBTQ+ business owners — and women of faith — we recognize that we represent many communities and we can positively impact their lives just by being here,” Vel said. “People come into our restaurant and say, ‘I see myself in you.’ Or a parent will come in and say, ‘My daughter is gay, and I want to support your business.’ It’s very emotional at times.”

Their happily ever after eventually brought them to Charlotte. During a visit to the Queen City, they went in search of vegan soul food and quickly discovered the city lacked options. The wheels started turning, and in October 2018, they opened the city’s first Black-women-owned vegan soul food café, combining their first names to create VelTree, the Vegan Experience.

The restaurant is known for its eclectic mix of vegan dishes that have been touted by celebrities such as Erykah Badu, Nick Cannon and Anthony Hamilton, who gave the business a shout out during an interview after he received the keys to the city.

In a video provided exclusively to CharlotteFive, Hamilton said he’s “here to celebrate VelTree” and its expansion, along with all the positive things the women are doing in the community with good food and healthy alternatives.

“I’ve been a fan for years. When I first tasted, I knew that it would be special and that the world needed to be able to experience this,” Hamilton said, noting that he’s “VelTree certified.”

Badu, who struck up a friendship with Vel after the chef catered a meal for her during a BET event back in Maryland, shared a video on social media shortly after the original VelTree opened.

“If you are a vegetarian, a vegan, plant-based dieter, alkaline foodie or just want to experience what vegetarianism — soul vegetarianism — is all about, please come visit,” Badu said before admitting she broke her raw diet to eat Vel’s food. “Because I deserve it!”

And just what do folks crave most from VelTree?

Plant-based crab cakes, topped with a vegan shrimp and crab sauce and served with chickpeas and hearts of palm, are a fan favorite — which seems appropriate coming from the Maryland transplants. The meatless options also include bourbon-baked ribz, barbecue drums, meatless loaf and country fried chic’n. VelTree also offers soul burgers, po boys and wraps. Some people come in just for the sides such as mac-n-cheeze, yams, chef’s greens, black eyed peas and more.

‘Huge’ plans on the radar

The move to Ballantyne was just the beginning for VelTree. The new site allows the restaurant to continue hosting open mic nights, karaoke, yoga workshops and other special programming — but with food. And now, with more space, the owners can make an even greater impact on their community.

The restaurateurs are planning networking events for professionals to share leads and connect with each other. They’ll also open Sunday mornings for a community worship group — something that’s pulled on their hearts for a while now.

“We’ve been called to do this,” Tree said. “We’ve been blessed with such a supportive community, and we want to give back in areas that matter the most.”

Even bigger projects are on the horizon.

“We’re filming a TV show, but we can’t talk about it just yet,” Vel teased, promising to share more details with CharlotteFive once producers give them the green light. “We’ll also have something huge in October around Halloween. We’re transforming the restaurant into something completely new and different.”

More immediately, the VelTree team plans to open a ghost kitchen in another part of Charlotte to give customers more access to their food. And for those who just can’t get enough, the restaurant is installing additional freezer space for frozen pickup selections.

“We’re really doing what we can do to innovate and think outside of the box to reach customers and give them the best possible experiences,” Tree said. “It’s so amazing to see people come in and just rave over the food. A little boy recently said, ‘this place is a 10 out of 10.’ You know kids tell the truth. They just love the cuisine and the flavors. And we’re here for it.”

Shannon Greene is a Charlotte native and Winthrop University graduate with more than 20 years of journalism and communications experience. Outside of work, she enjoys going on adventures and making memories with her 6-year-old son, Evan. Follow her on Instagram at Shannon_Greene_SC or Twitter @Shannon_Greene