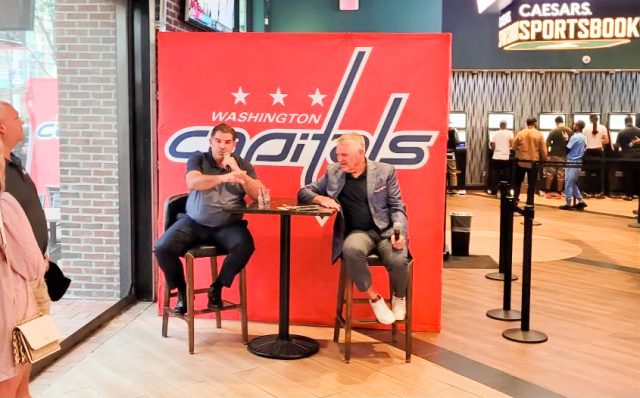 Laviolette fielded a wide range of questions, including the free agents the Capitals recently signed and the current Development Camp, which is currently underway at MedStar Capitals Iceplex.

Laviolette also discussed his hockey journey, which included playing four years at Westfield State Hockey in the Eastern College Athletic Conference (ECAC). He then played professionally for nearly 10 years, primarily in minor league hockey, but also 12 games with the New York Rangers in 1988-89.

Laviolette also represented the US in the 1988 Olympics where Tony Granato, a teammate of his with the Colorado Rangers and later a teammate on the New York Rangers, was his roommate.

At the end of his playing career, Laviolette was offered a player/assistant coach position with his last team, the Providence Bruins, but said he wanted to be a head coach, ultimately becoming the head coach for the Wheeling Nailers in the ECHL for the 1997-98 season. It was in Wheeling where son Peter, who is on the development camp roster this week, was born.

Laviolette then spoke about the new free agents who had signed with the team, including Darcy Kuemper, Charles Lindgren, Marcus Johansson, Matt Ervin, and Erik Gustafsson. Many of the comments he made about the new free agents at the Happy Hour were similar to the comments that he made at his post-Development Camp practice press conference on Wednesday.  [Note: At the time of this happy hour, the news of the Capitals signing Dylan Strome had not been released.]

In talking about Kuemper, Laviolette said that he was excited to have him on the team, raving about his “experience and success”. He mentioned that Kuemper covers a lot of the net and keeps pucks out of the net.

Laviolette also talked about the signing of backup goaltender, Charles Lindgren, saying, “From what I understand, he’s a really great person, great team guy, and has had some good numbers as well, so definitely, a new look in net for us and we’re really excited about it.”

His comments on Marcus Johansson included the fact that he knew the team, most of the systems, and how to get around Washington but still had to adjust to Laviolette who had never coached him before.

Laviolette mentioned that he has coached Matt Irwin before, in Nashville and praised his work ethic and attitude.

Laviolette also talked about Development Camp and the fact that this year he was coaching his son, Peter. He mentioned he had two other children, Jack and Elizabeth, and that Jack had also played hockey.

Peter Jr. played five years of hockey at Plymouth State University, an NCAA Division III school. He gained an extra year of eligibility, thanks to the Covid-19 pandemic. Peter Junior was working on his Masters’ Degree during his last year of eligibility. Coach Laviolette said he is hoping his exposure at Development Camp will help him get an NHL opportunity even though it’s not likely he’d get it with the Capitals.

Laviolette also spoke about how Development Camps have changed over the years. In the past, camps would entail working hard. Nowadays, they include topics such as nutrition and developing the whole person.

Laviolette talked about top prospect Hendrix Lapierre and how much he has developed since last season and also expressed excitement about Connor McMichael, although the latter was not at Development Camp.

One other topic Laviolette discussed was Alex Ovechkin, the Capitals captain. Before coaching the Capitals, Laviolette admitted he didn’t know Ovechkin personally, but once he started coaching the team, he learned that Ovechkin really loves hockey and is enthusiastic about even practicing. Whenever he wishes to take a day off from practice, he really needs it. Often, he has practiced on days when most of the other veterans have had off.

Once Laviolette finished his Q&A session, he posed for pictures with fans before departing. Laughlin, meanwhile, remained at the venue to interact with fans. One fun fact we learned about Laughlin while at the event is that his son’s wife is currently expecting a baby. So, Locker is about to become a grandfather. Congratulations to Craig and the Laughlin family!