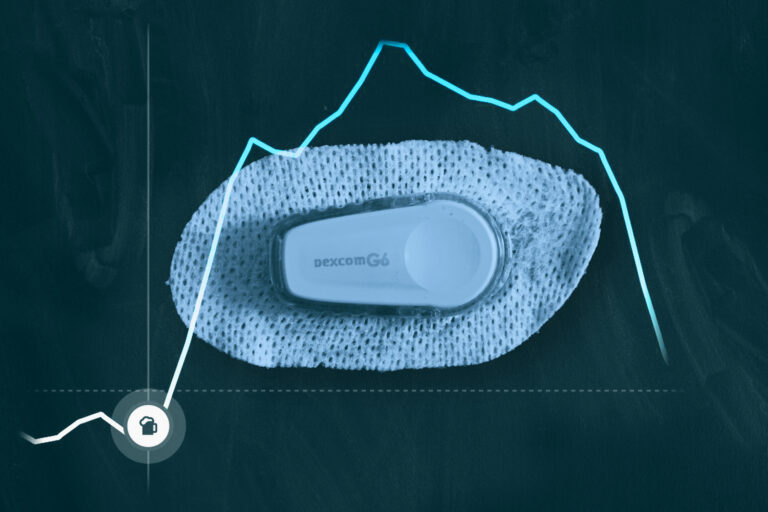 I felt a special kind of awe, then panic, watching my glucose levels skyrocket for the first time after relishing a cold beer on a sweltering summer evening. It was a biological push notification from the fluid just beneath my skin that the carbohydrate-packed beverage was interfering with efforts to maintain my health and weight.

For years, people with Type 1 diabetes have worn continuous glucose monitors, or CGMs, to track blood sugar spikes and make sure they’re getting enough insulin. CGMs are small patches with tiny needles for sensors that prick the skin and are generally worn on the stomach or back of the arm.

Now, a wave of tech companies are selling CGMs to the public. That made me curious: Would this work for me? What would I learn?

The devices, linked to apps with personalized analytics and meal planning advice, are being touted as a behavior-changing path to better health and athletic performance, consistent energy, and overcoming the dreaded weight-loss-weight-gain cycle once and for all.

For people without diabetes, tracking the glycemic response to meals can pinpoint which foods significantly spike blood sugar, leading to a subsequent blood sugar crash and then lethargy. That excess insulin and glucose in the blood stream can also signal to the body to put the surplus sugar in storage, causing weight gain.

The new-age, health-monitoring ecosystem sprawls well beyond CGMs, leaving traditional step counters in the dust. A tracker in the form of a sleek, titanium ring made by Ultrahuman monitors movement and sleep — and can be paired with a glucose-monitoring patch. Whoop’s wearable technology, which tracks respiratory rate, blood oxygen, and other health metrics, can embed in a sports bra. Another device, the Lumen, analyzes breath to determine whether the user is burning carbs or fat.

The market for this technology is huge, from Olympic athletes to office workers looking to avoid the post-lunch lull. The nation has long been in the throes of what is often referred to as an obesity epidemic. From 2017 through 2021, 26% of Americans, on average, said they were “seriously trying to lose weight,” and more than half said they would like to, according to Gallup surveys. And about 96 million U.S. adults have prediabetes, increasing their risk of developing chronic diseases like Type 2 diabetes and heart disease, according to the Centers for Disease Control and Prevention. Prediabetes affects people who are both lean and overweight, though obesity does elevate diabetes risk.

Investors are taking note. Nearly $3.5 billion poured into U.S. weight loss digital health startups from 2020 through the first half of 2022, according to an analysis by venture fund Rock Health for KHN. CGM startups Levels, NutriSense, Signos, and January have raised more than $140 million in funding collectively, according to company funding database Crunchbase.

There’s plenty of hype about all the data they deliver.

Ads online and in podcasts often feature active 20-somethings. They promise unique insights into how individual bodies react to food, exercise, and sleep in real time by homing in on metabolic health and how well users keep their glucose levels in check. “We’re taking on weight loss by giving every body a voice,” says CGM-based company Signos. A promo for Lumen shares: “You hold in your lungs the secret to sustainable weight loss.”

But even as people in the field have seen “significant” results from incorporating these tools into weight loss programs, they acknowledge that no single approach seems able to do it all. For instance, Eric Kusher, a doctor of chiropractic who runs an intensive weight loss program at Compass Fat Loss, said he still relies on the human element, too, falling back on his staff’s dietary advice, not the meal guidance provided by apps.

The reality layer is also important, said Dr. Nirav Shah, a senior scholar at Stanford University’s Clinical Excellence Research Center. “If you’re a harried mother trying to care for three kids and hold down a job, you’re not going to have time to monitor and create the perfect green shake,” he said. “You’re going to buy the dollar meal because that’s easier and cheaper for your kids — and then you’re going to eat whatever they don’t eat.”

For weight loss and inflammation flare-ups, Sarah Schacht, a 42-year-old government innovation consultant from Seattle, has tried all kinds of health tech, including Levels and Lumen. The generalized “eat less, move more” — flawed advice for many — wasn’t working for her. The Levels app lets the user log meals, exercise, and other notable events; combines the information with CGM data; and then offers insights and advice on how users can foster gentler glucose curves. Since starting Levels a year and a half ago, she has lost 5 pounds, her weight has stabilized, and the inflammatory responses have gone down. But her body has not dramatically changed, she said.

“I get the feeling that the few success stories I’ve seen, people who have radically changed their bodies, spend a lot of time on their eating strategy,” Schacht said. “Not everyone has that mental capacity, time, or budget.”

These devices aren’t covered by insurance, so, with related subscriptions for the data, costs can be hundreds of dollars annually. There is also scant research on CGMs’ effectiveness in improving the health of people without diabetes, let alone prompting weight loss. Without firm results, many health care providers are skeptical. Some experts also worry that the constant stream of data could prompt disordered eating.

Dr. Caroline Apovian, co-director of the Center for Weight Management and Wellness at Brigham and Women’s Hospital in Boston, said she does not see the use of an expensive CGM for someone who doesn’t have diabetes, especially with new weight loss drugs within reach. Those drugs, of course, will also carry a hefty price tag.

“It’s hard work losing 10 pounds,” Apovian said. “A CGM is going to wipe out your money so you can’t join a gym.”

Most of the people who have insulin resistance and metabolic disease tend to be lower income and minorities who can’t afford CGMs, said Logan Delgado, co-owner of BioCoach. BioCoach has FDA clearance for its glucose and ketone meter, which checks glucose levels and tests for ketones in the blood — a sign the body is burning fat for energy. Its more traditional finger-prick technology keeps the subscription price down to $30 a month while still letting people without diabetes learn about their metabolic health, though not with continuous data. The company has amassed a large following on TikTok, where Delgado and others raise awareness about sugary foods and diabetes.

The CGM startups generally offer one of two CGMs: Abbott’s FreeStyle Libre, which is cheaper and requires a manual scan of the sensor by a smartphone, or the Bluetooth-connected Dexcom G6, which updates to a smartphone automatically. The monitors are provided to people without diabetes through “off-label” prescriptions because the FDA has not yet approved the tools for the general population.

CGMs are available over-the-counter in Europe, so companies are betting that the FDA will approve them to be available on drugstore shelves in the U.S. That should drive down the prices of the sensors, which can cost hundreds of dollars.

But already January says it can use artificial intelligence to predict a person’s glucose levels after a user wears a CGM for two weeks. The algorithm, backed by published research and a library of food nutrition data, can then predict the person’s glucose response to thousands of foods before the user decides what to eat, not after. This brings the cost down, essentially creating a virtual CGM, said Noosheen Hashemi, CEO of January. The company is rolling out a new version of its app this fall.

Across the board, the startups are largely working through the kinks, some still conducting the research to back up their marketed claims and taking different approaches to using the technology. A common theme for the startups, though, is going direct-to-consumer first — aiming for people who can afford the concept — before eventually seeking coverage from insurers, said Bill Evans, founder and general partner of Rock Health Capital.

The companies are also trying to add novel twists to how their apps use the data to reach health and weight-loss goals, each with libraries of informational blogs, lessons, and activities. They range in cost from hundreds of dollars annually to more than a thousand, with charges covering the price of the hardware, the subscription for wraparound services, and in some cases nutritionist support. The companies are banking on the idea that customers will sign on for the long term.

Taking a more wraparound approach, NutriSense has leaned heavily into building out an 80-person nutrition team that works closely with customers, according to Kara Collier, the company’s vice president of health.

Signos, which focuses on weight loss, uses artificial intelligence to set a “weight loss range” for customers depending on their general glucose ranges and level of fitness.

Out of curiosity, this reporter stuck a CGM on the back of her arm for 10 days and signed up for the Levels app. At first, the metrics were jarring. As a person without diabetes, I had never reckoned with my glucose levels before.

Then I started recognizing patterns that made sense: Drinking beer always spiked my glucose, but a bagel after a long morning walk kept my blood sugar relatively stable. Avocado toast or eggs for breakfast were better alternatives, though. And a salad with chickpeas, tomatoes, and turkey for lunch earned top marks.

Digesting data alongside every meal certainly made me think harder about what I ate and when I exercised. But it also felt like a lot of extra homework.

Dietary Fiber Not Always a Friend to IBS Sufferers