What is TikTok’s Pink Sauce? Ingredients and Where to Buy, Explained 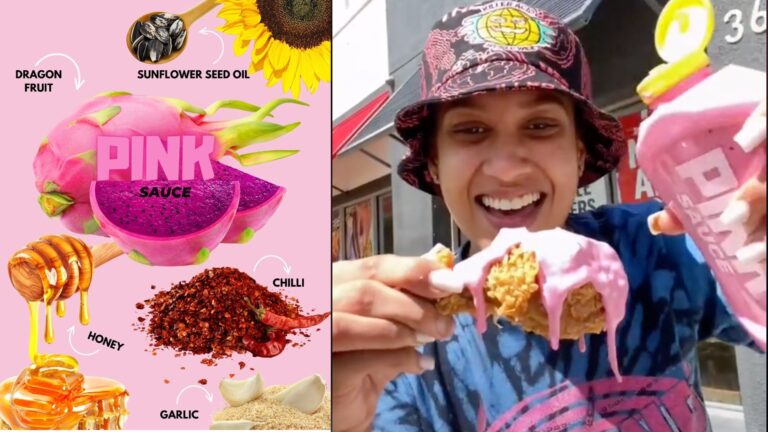 A pink-colored craze is taking over TikTok.

The platform’s new obsession comes in the form of Pink Sauce, a blush-colored condiment from user @chef.pii. The sauce is absolutely everywhere on TikTok, as users swarm to try it for themselves. What started as a series of simple promotional videos has transformed into an online craze, spreading across platforms and coating the internet in salmon-tinted content.

The earliest Pink Sauce videos started cropping up in mid-June, as @chef.pii teased the masses with a brilliantly pink, impossible-looking sauce. Soon, word began to spread, and people from all over began inquiring about the oddly-colored condiment. It’s turned into a phenomenon all on its own, but the mystery swirling around TikTok’s new favorite dressing is giving some users pause.

What is TikTok’s Pink Sauce?

After @chef.pii shared several videos of her enjoying the brightly-colored condiment, inquiries quickly began pouring in as users wondered after the sauce and pressed @chef.pii to begin marketing it. She quickly acquiesced this request, documenting her journey as she perfected and bottled the strange-looking substance.

Soon, bottles of Pink Sauce were shipping out to the eager masses. In recent weeks, people have begun to receive their Pink Sauce orders, and they couldn’t be more thrilled. The lack of several concrete details — like what, exactly, is in the sauce — have some people concerned, however. They want to know what gives the sauce its brilliant color, as well as what it tastes like, before they’ll be willing to shell out cash for a bottle of their own.

What’s in the sauce?

The ingredients in Pink Sauce have become a hot-button topic online, as users work to discover not only what gives the sauce its color, but also if its actually safe to consume. A bottle of the mysterious dressing will run purchasers $20 from @chef.pii’s online store, which certainly seems high. A bottle of Pok-E-Jo’s mango habanero barbecue sauce — the actual nectar of the gods — costs less than $10 a bottle, so its a bit hard to digest that a mysterious bottle of pink liquid doubles the price — before shipping and handling. Once you’ve factored in the cost of shipping, a bottle will run most purchasers more than $30 — and that’s with standard options. Consumers willing to shell out the cash for premium shipping will be faced with an utterly appalling price tag of more than $60 for a single bottle of pink-colored sauce.

The ingredients list for Pink Sauce includes “water, sunflower seed oil, raw honey, distilled vinger [sic], garlic, pitaya, pink Himalayan sea salt, less than 2 percent of dried spices, lemon juice, milk, and citric acid.” Each of these ingredients can be found at most traditional grocery stores, with the potential exception of pitaya, or dragon fruit. Slightly higher-end grocery stores are likely to have the product in inventory, but other locations may have a less diverse selection.

Apart from that, Pink Sauce appears to be composed of relatively basic, everyday ingredients. Not everyone is convinced of the ingredient list’s accuracy, however, and they’re sharing their opinions online. One user, in particular, is poking holes in the listed ingredients, and people are starting to listen.

User @jptheworst, who dubs himself TikTok’s “Sauce Boss,” prides himself on his dressings. As he notes in one mega-viral video, he “is really good with dressings.” As a rare sauce expert, @jptheworst took it upon himself to point out a few “red flags” he noted with Pink Sauce.

@jptheworst begins his breakdown by noting that the ingredients list is “crazy,” and equals out to around “40,000 calories for a bottle, which is definitely not correct.” He also notes the fact that vinegar is spelled wrong on the label, and that the sauce contains milk. This is odd, according to @jptheworst, even in small quantities, because you’d need to keep the bottle consistently cold. And based on numerous unpacking videos that show people receiving their bottles of Pink Sauce, it is not refrigerated in transit.

That doesn’t necessarily mean that the sauce is dangerous to consume — and, in fact, dozens of videos would indicate that its perfectly fine — but it does mean that there’s some level of dishonesty going on. Some people are allergic to ingredients in mayo, and without knowledge of its inclusion, could experience negative reactions to Pink Sauce.

There’s also the fact that the product has yet to be approved by the Food and Drug Administration. According to the FDA’s website, the administration “regulates all foods and food ingredients introduced into or offered for sale in interstate commerce,” with the exception of products regulated by the U.S. Department of Agriculture. Pink Sauce should fall under the FDA’s regulation.

According to @chef.pii, however, the process of “quality testing” is already underway. As a professional chef, she says things like nutrition facts and quality testing are vital, but details surrounding FDA approval have been largely absent from her videos.

This is causing concern among some of her viewers, who note that a lawsuit could be in @chef.pii’s future, if she isn’t careful. Thankfully, @chef.pii is already in the process of addressing concerns, some of which she zeroed in on via a July 20 upload. At the outset of the video, she apologizes for the mistakes made by she and her team, but notes that they are “human” and that “things happen.”

She first addresses issues with the quantity and serving sizes included on the bottle. According to @chef.pii, each bottle contains “444 grams of Pink Sauce,” which is about 30 servings overall. The label has reportedly been fixed to reflect the new, more accurate, numbers. @chef.pii and her team are also apparently hard at work getting the cost per bottle down, but expressed gratitude to the people who’ve shown up to support their product.

And, while the product has yet to be FDA approved, @chef.pii says her team is “following FDA standards,” and that Pink Sauce is currently in the “lab testing” phase of approval. “Once we go through lab testing,” she says, “we will be able to pitch to stores to put the Pink Sauce in stores.”

For concerned consumers, it is probably safest to wait until the product has been approved by the FDA before making a purchase. Reviews on TikTok largely praise Pink Sauce for its color, flavor, and versatility, but that doesn’t necessarily mean the product is safe for everyone. Regulatory bodies like the FDA exist for a reason, and many people would feel more comfortable enjoying a bottle of Pink Sauce once approval has officially come through.