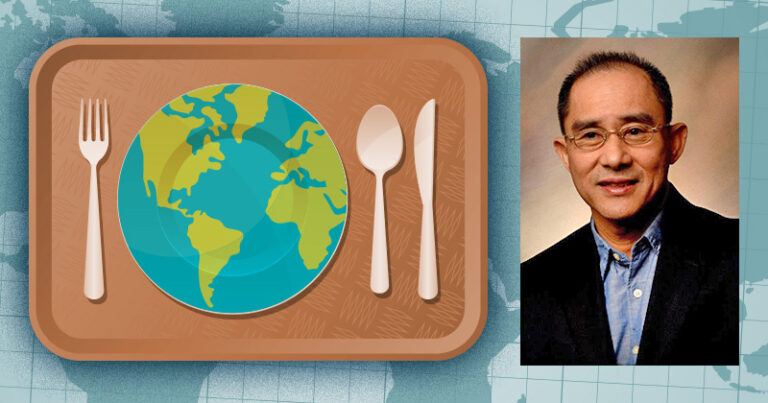 University of Delaware alumnus Rodolfo Nayga Jr. wants to know what people eat. When people ask the internationally renowned food economics researcher what he does for a living, that’s where he starts.

“I want to know what people eat, why they eat those foods, what motivates them and how preferences in consumption patterns impact people’s health outcomes,” said Nayga, the head of the Department of Agriculture Economics at Texas A&M University.

Rudy, as his colleagues call him, is one of the world’s most prominent authorities on critical issues related to the economics of poverty, nutrition, obesity and novel food technologies. His brilliant career includes investigations into issues related to how people comprehend and use food and nutritional labels. The former Blue Hen amassed a mountain of findings on how this influences important health outcomes such as diet quality and obesity. Nayga has also analyzed the effects of federal food programs such as the National School Lunch Program, Supplemental Nutrition Assistance Program (SNAP) and the Fresh Fruit and Vegetable Program on food consumption and obesity.

The number of times that his research is cited (15,000 and counting) is incredible; he’s in the top 1% of the roughly 6.9 million scientists, and the top 1% of agricultural economists. For him and fellow academicians in his field, their research directly informs food policy and people’s wellbeing.

“Not only is he incredibly prolific, his research has focused on some of the most important issues in food policy over the years — the food supply chain during COVID-19, childhood obesity, poverty, food waste and many more,” said Martin Heintzelman, professor and chair of the UD Department of Applied Economics and Statistics. “He is someone to whom the profession and policymakers look when needing timely analysis of important food and policy problems.”

Nayga’s interest in the economics of food consumption was sparked in the mid-1980s when he was an agricultural economics master’s student at UD.

A native of the Philippines where he earned his bachelor’s degree in agribusiness, Nayga discovered UD via his cousin, who was a friend of UD faculty member Conrado “Bobby” Gempesaw. Nayga credits Gempesaw and legendary College of Agriculture and Natural Resources professor Carl Toensmeyer as his UD mentors. Nayga describes a very tight-knit department with graduate students who knew each other very well; many of the students in his cohort went on to successful careers in private industry or with the U.S. Department of Agriculture.

“Delaware was a big influence and a big help to my career for sure. I was exposed to more food issues in my UD classes and in conversations with my professors and fellow graduate students,” said Nayga, who earned his master’s degree in agricultural economics (now called agricultural and resource economics) in 1988. “I became interested in how food issues relate to health.”

Nayga has been a firehose of research ever since. Not even a global pandemic could slow him down! As he and his research collaborators shifted previously designed face-to-face studies to online surveys and experiments, he topped his own already feverous production levels.

His career has taken him around the country and the globe. After graduating from UD, Nayga received his doctorate from Texas A&M University. In addition to Texas A&M, he’s been a faculty member at Rutgers University, the University of Arkansas and at Massey University in New Zealand. He’s been a Fulbright Senior Scholar at Wageningen University in The Netherlands, an adjunct professor at Korea University and Norwegian Institute for Bioeconomy Research, senior research fellow of the Waseda Institute for Advanced Study in Tokyo, and research fellow at the University of Verona, Italy. Recently and perhaps unsurprisingly, Nayga was elected president of the Agricultural and Applied Economics Association, the premier professional association of its kind in the U.S.

Whether they follow his path into agricultural economics or study in a completely different field, Nayga pinpoints curiosity and passion for your discipline as essentials for up-and-coming researchers.

“If you are really passionate about a topic, it doesn’t feel like work,” said Nayga, who recently earned the UD College of Agriculture and Natural Resources’ Distinguished Alumni Award.

When he advises his students, Nayga starts with probing questions to uncover their passions; then he connects the conversation to his academic journey.

Don’t expect the Nayga research engine to tap the brakes any time soon. The same unrelenting motivation that he displayed as a graduate student still burns bright today.

“The thirst for knowledge is what keeps me motivated. I don’t do it for the money or the awards,” affirmed Nayga. “I do it because I think what I am doing is important and has usefulness in terms of policy and people’s welfare.”